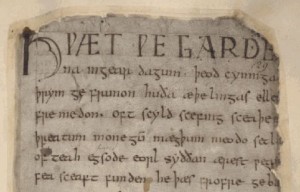 Heriot is one of those words I didn’t notice right away in my research, probably because I didn’t know what it was. But the payment of heriot was pervasive throughout the tenth and eleventh centuries, though it’s kind of hard to get one’s hands around. What is it? In a nutshell, heriot was a kind of inheritance tax. It was due to the king, or the overlord, or the bishop, or even the sheriff, and apparently was a great source of income overall. The higher the rank, the greater the heriot. Heriot was expected to be paid promptly, or at least within a year, if you wanted to ensure that you had the right to inherit land and wealth. A Will wasn’t exactly enough; payment of heriot put an obligation on the king (or recipient) to enforce the deceased person’s Will and ensure the inheritance for the heir. Alas, a suspicion of treason toward the dead person might derail the whole process, an event which was recorded in Aethelred’s reign. He refused to honor the will of a certain Aethelric of Bocking even though his widow arrived promptly with the heriot.

Apparently this custom came from the old Teutonic days when a lord presented arms and armor to a follower that were returned to him on the recipient’s death. Canute drew up special provisions for heriot in his secular law code (II Cnut § 71), which established the amount due from each level of aristocracy: “Heriots are to be determined as befits the rank: an earl’s as belongs thereto, namely eight horses, four saddled and four unsaddled, and four helmets and four coats of mail and eight spears and as many shields and four swords and 200 mancuses of gold; and next, the king’s thegns who are closest to him: four horses, two saddled and two unsaddled; and two swords and four spears and as many shields, and a helmet and a coat of mail and fifty mancuses of gold; and of the median (medumre) thegn: a horse and its trappings, and his weapons or his healsfang (2.5 pounds) in Wessex; and two pounds in Mercia and two pounds in East Anglia. And the heriot of the king’s thegn among the Danes, who has his soc (rights of jurisdiction): four pounds. And if he has a more intimate relation with the king: two horses, one saddled and one unsaddled, and a sword and two spears and two shields and 50 mancuses of gold. And he who is of lower position: two pounds.” (see Ancient laws and institutes of England, comprising laws enacted under the Anglo-Saxon kings from AEthelbirht to Cnut by Benjamin Thorpe). On some occasions, a Bishop’s heriot was seen to exceed even that of an earl. But heriot wasn’t only for the aristocrat; even ceorls and freemen were often obliged to give up their best beast or equivalent; apparently an oxen was worth more than a horse.

A widow’s status was complicated. Canute gave a widow twelve months to pay her husband’s heriot. But she had to remain unmarried. If some unscrupulous relative coveted her inheritance, they could force her to marry or join a convent in that twelvemonth, in which case she would lose both her morning-gift and all possessions from her former husband. These would then pass on to the nearest kinsman. But at the same time, the king would lose the heriot tax if this were to happen, so it was also written into Canute’s law that a widow should never be forced to marry a man she dislikes. After all, the Crown had much to lose. In THE SONS OF GODWINE, Harold’s future wife was a recent widow and had to evade the attentions of an unwelcome suitor.

Apparently this custom remained in force for many centuries in its various forms, though following its usage is fraught with confusion. I did find a book: The Law of the Heriots: With an Introductory Note on Their Origin by Edward Broughton Broughton-Rouse which brings you all the way up to the mid-19th century, but luckily this is beyond the scope of my study!