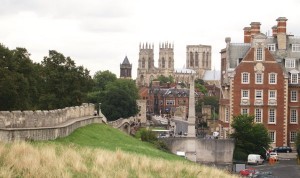 Medieval York is the setting for my new novel, Rogue Knight. Today it is a prominent city in Yorkshire in the North of England. And it was before the Conquest.

Though it has ancient origins, the city was founded by the Romans in 71AD. At one time, there was an old Roman fortress where the Minster is today. When Britain converted to Christianity in the middle of the second century, York became the seat of the archbishopric.

In the seventh century, York was the main city of the Northumbrian King Edwin, but in 866, the Danes captured York and it became the capital of the Danelaw where the laws of the Danes governed from the 9th into the 11th century. The growth in York’s size and prosperity beginning with the 10th century was accompanied by a transformation of the countryside with well-planned villages surrounded by arable open fields. Until the eleventh century, there were virtually no towns in Yorkshire except York. And York was the only town with a mint north of the Humber River until after 1066. 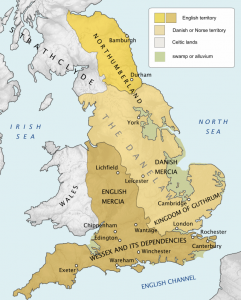 Sweyn of Denmark conquered England in 1013 and was succeeded by his son Cnut the Great who ruled as King of Denmark, England and Norway. He and his progeny effectively ruled England until Edward the Confessor.

While the term “Yorkshire” was not recorded until about 1050, it is thought to have been created around 1000. By at least 1033, King Cnut had appointed Siward as Earl of Northumbria, including a greater Yorkshire, south Lancashire and (from 1041), Durham and Northumberland. In its language and culture, York was Anglo-Scandinavian. Even at the time of the Conquest, almost every street in the city of York had the Old Norse suffix “gata” or “gate” meaning “street” and most of the personal names of the people would have been Scandinavian. Likely Old Norse was spoken in the city, too. (It is in my novel.)

Excavations of the Coppergate area have revealed that York was importing a wide range of goods: Rhenish pottery (probably originally containing wine), honestones (for sharpening) from Scandinavia, clothing pins from Ireland, amber from the Baltic and cowrie shells from the Red Sea or Gulf of Aden. And there was silk, too, probably from Constantinople or Asia. They have even found Islamic coins from Samarkand. It was a city of business and trade. More 10th and 11th century weights and balances have been found in York than anywhere else in England.

In 1055, Siward died leaving one son, Waltheof (a character in Rogue Knight). Waltheof would later have a rather amazing life, first as an English earl, then as a rebel in Northumbria in 1069, but when his father died, Waltheof was too young to succeed as Earl of Northumbria, so King Edward appointed Tostig Godwinson to the earldom. And we all know where that led.

In 1066, Harald Hardrada obtained the submission of York after the battle of Fulford Gate. Not only did York provide Hardrada with supplies, they agreed to support him in his conquest of the south. It has been suggested that York was a willing accomplice in Harald’s venture; he might have been preferable to the distrusted Harold Godwinson. An exchange of hostages was arranged, and Hardrada moved on to Stamford Bridge to await their arrival. But it was not meant to be; after a forced march, Harold Godwinson passed through York on his way to Stamford Bridge and forestalled any further commication with the Norwegian King.

Both Tostig and Harald died at the Battle of Stamford Bridge and soon thereafter Harold of Wessex fell to William the Conqueror at the Battle of Hastings. At the time, York was the largest city north of London and an important center of commerce with as many as 15,000 residents, thus it was a city William the Conqueror very much wanted under his control. However, it was not to come to him easily. The people of York did not consider William their king any more than they had the Saxon Harold Godwinson before him. The years following the Conquest would see uprisings in York, one in 1069, led by the Danes with 240 ships. And that story is told in Rogue Knight. 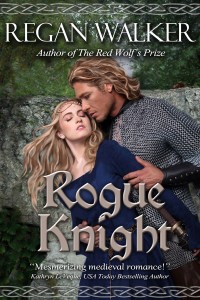 The North of England seethes with discontent under the heavy hand of William the Conqueror, who unleashes his fury on the rebels who dare to defy him. Amid the ensuing devastation, love blooms in the heart of a gallant Norman knight for a Yorkshire widow.

Angry at the cruelty she has witnessed at the Normans’ hands, Emma of York is torn between her loyalty to her noble Danish father, a leader of the rebels, and her growing passion for an honorable French knight.

Loyal to King William, Sir Geoffroi de Tournai has no idea Emma hides a secret that could mean death for him and his fellow knights.

WAR DREW THEM TOGETHER, WAR WOULD TEAR THEM APART

War erupts, tearing asunder the tentative love growing between them, leaving each the enemy of the other. Will Sir Geoffroi, convinced Emma has betrayed him, defy his king to save her?

7 thoughts on “York Before the Conquest: Guest Post by Regan Walker”