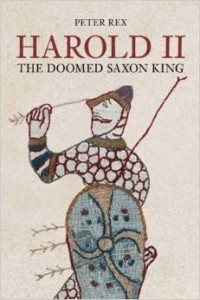 I’m not quite sure where I would put this volume in my own line-up of pre-conquest history books. On the one hand, it covered the issues intelligently and carefully. On the other hand, many of the major books he cites in his bibliography are already on my bookshelf…especially the 20th century sources. So on the one hand, on an information gathering mission I didn’t learn anything majorly new. Nonetheless, I placed a lot of bookmarks which means he touched on little details that fleshed out my understanding.

In many ways, the value of this book is in the explanations of things we just might not be entirely sure about. For instance, we get interesting general details: “The manors of an earl were probably organized like the royal demesne, the ‘home farms’ of the monarchy, into either provisioning or revenue-producing units. Entries in the Domesday Book note the number of nights’ farm that could be obtained from a manor. They were the cost of overnight provisions for the king or lord and his whole household when visiting the manor.” That helps explain some everyday factors that usually slip past us. There are many other explanations of this kind that helped put things into perspective for me.

The author also tried to make sense of conflicting histories, especially concerning the battle of Hastings and its aftermath. Which came first, and who influenced who? And why? “Admittedly, some historians criticize the Carmen, believing it to be a twelfth-century product, but the balance of probability seems to favor an early date for this work, around 1068…” Was the arrow in the eye story an effort to portray Harold as being punished from God for his perjury? Or was there some confusion between his death by an arrow and Harold Hardrada’s arrow in the throat? How much was this story influenced by the nineteenth century restoration of the Bayeux Tapestry? As you might guess, these passages raise more questions than they answer, but these questions are probably unanswerable anyway, so we might as well learn as much background as possible.

I was interested to see that Tostig’s troubles in the north may have had much to do with reforming the out-of-balance low taxation in Northumbria (when compared to the rest of the country). According to the author, “There was a reform of the royal household in the interests of efficiency early in the 1060s…Tostig’s rule was then seen as tightening royal control of the north at a time when the Witan in England was dominated by Harold, which would explain why Tostig blamed Harold for the revolt and accused him of conspiring against him.” To me, this is a big statement. First of all, it implies that Tostig did not arbitrarily raise taxes, which supposedly sparked off the insurrection. And it also gives a reason why he would accuse Harold of fomenting the rebellion, aside from a mere hysterical reaction. There’s a lot of food for thought here, which certainly delves deeper than the usual bland interpretation of Tostig’s allegedly poor government.

So, overall, I would say I have benefitted from reading this book. The writing was a little hard to get through in places, and I feel the author jumped around a little bit, but it gave me some specifics where I needed them in an academic manner. If I didn’t know anything about the period, I would probably have had a hard time getting through the book. It was really more about explaining why certain things happened rather than merely telling us a straightforward history, although there is a certain amount of that, too. But I think the straight history passages served as a vehicle to get us to the good stuff: sorting out the evidence of our many sources.

8 thoughts on “My review of HAROLD II: The Doomed Saxon King by Peter Rex”