It was 1984. I was in a seminar room in Kentish Town in North London and my tutor, Ann Williams, was talking to us about the 10thc anti-monastic rebellion. Ealdorman Aelfhere, one of the three most powerful noblemen in the country, was the leader of this rebellion, and he was described as the ‘Mad blast’ from Mercia. I wanted to know more about this guy. And I wanted to write his story.

My first novel, To Be a Queen, tells the story of Aethelflaed, daughter of Alfred the Great. She effectively became ruler of what was by then little more than a satellite kingdom of Wessex, but had originally been a powerful kingdom in its own right. Mercia gave us such great and notorious kings as Penda, and Offa. Now it was allied to Wessex, pledged to fighting off the Viking army.

The allies were successful, for a while. Anybody who regularly reads Mercedes’ blog and/or knows a bit about the 11thc will know that it wasn’t long before the Vikings were not only here to stay, but were running the show. Swein, his son Canute, his sons (briefly), and then William of Normandy who was, to all intents and purposes, ethnically a Viking.

But what happened in between? And why was England so ripe for a takeover bid in the 11thc?

The 10thc is not much talked about. It was a bit, well, peaceful. No Vikings, no wars between the kingdoms, no kings with the epithet ‘the great’.

England in AD956 was, for the first time in living memory, free of the Viking threat. Just as well, because there was a bit of a problem. Kings kept dying, young, without offspring. Athelstan (Alfred’s grandson) had done an excellent job of uniting all the English kingdoms and sorting out the Scots and Irish but he’d not done such a great job of finding a wife and having children. When he died in 939 the crown passed to his half-brother, Edmund. He managed to produce two sons, Edwy and Edgar, but he died prematurely and the kingship went to his brother, Eadred. His most notable act was probably seeing off Erik Bloodaxe and restoring the Viking Kingdom of York to English control. Then he died, too.

In AD955 King Edwy, the eldest of the boys born to Edmund, became king. Unfortunately, not a very good, wise, or chaste king. His brother, Edgar, was sent away to be fostered in Mercia and decided, when he was about 14, that he’d quite like a shot at being king. Trouble was, he was only 14, and he needed a bit of help. Like, maybe, from a newly ennobled earl by the name of Aelfhere (or Alvar, as I call him in my novel.) Alvar had received his earldom from King Edwy, and thus had sworn to serve him, but he knew him to be a fornicator and a fool. He was faced with a difficult choice. And so began his career…

I won’t reveal any plot spoilers, but it’s a matter of fact that Edgar died relatively young, although not childless. And this presented a bit of a problem. Because once again, the heirs to the throne were two young boys. This time, however, they were born of different mothers. The eldest boy, Edward, was already famous for having a short temper, and the other was very young.

I have my own theories about how and why the younger son’s temperament developed, but suffice to say he was the youngest of his mother’s four sons. The eldest two were deliberately kept away from her, the third died of a childhood fever. Could she be blamed for being overprotective of her last-born?

This lady, Aelfthryth, whom I’ve called Alfreda, was Edgar’s widow. She was also a consecrated queen and her supporters, Alvar included, felt that her son, having been born ‘in the purple’, was the rightful heir.

Others, including Alvar’s enemies in the Church, thought differently, and crowned Edward.

One night, Edward, he of the famous short temper, went to see Alfreda and her son. There was an argument, then a scuffle. Accounts vary as to what happened next, but the result was that Edward was fatally stabbed. Accusatory fingers pointed right at Alfreda but Alvar managed to quell the disquiet, put an end to the infighting and help to establish the surviving heir as king. It’s just a bit of a shame that the new boy-king’s name was Aethelred. And he did get an epithet, although not ‘the Great’ but ‘the Unready’ (meaning badly-counselled.)

He was not a good king. He was not a wise one. I think he was still a bit of a ‘mummy’s boy’. And somewhere, across the sea, a Danish king knew he could take advantage of this… 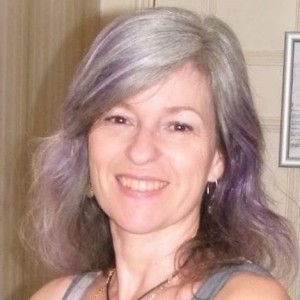 Annie Whitehead is a history graduate who now works as an Early Years music teacher. Her first novel, To Be A Queen, was long-listed for the Historical Novel Society’s Indie Book of the Year 2016. Her new release, Alvar the Kingmaker, is available now. She is currently working on the novel which was a prize-winning entry in the Mail on Sunday Novel Writing competition and which she was encouraged by Judge Fay Weldon to complete. 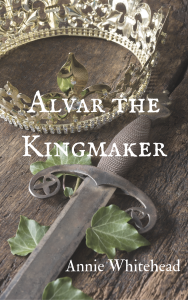 In 10th Century England,nobleman Alvar knows that securing the throne for the young and worthy King Edgar will brand him as an oath-breaker. As a fighting man, he is indispensable to the new sovereign, but his success and power gain him deadly, murderous enemies amongst those who seek favour with the king. Alvar must fight to protect his lands, and his position, and learn the subtle art of politics. He must also, as a man of principle, keep secret his love for the wife of his trusted deputy. Civil war erupts, and Alvar once again finds himself the only man capable of setting a new king upon the throne of England, an act which comes at great personal cost. His career began with a dishonourable deed to help a good king; now he must be loyal to a new king, Aethelred, whom he knows will be weak, and whose supporters have been accused of regicide. Can he bring about peace, reconcile with his enemies, and find personal happiness, whilst all the time doing his duty to his loved ones? And what of the fragile Queen, who not only depends upon him but has fallen in love with him? Aelfhere (Alvar) of Mercia was known to the chroniclers as the “The blast of the mad wind from the Western territories” but also as “The glorious earl.” This is his story.    Available on Amazon.com

Also by Annie Whitehead: To Be A Queen 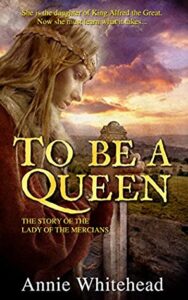 One family, two kingdoms, one common enemy …
This is the true story of Aethelflaed, the ‘Lady of the Mercians’, daughter of Alfred the Great. She was the only female leader of an Anglo-Saxon kingdom.
Born into the royal house of Wessex at the height of the Viking wars, she is sent to her aunt in Mercia as a foster-child, only to return home when the Vikings overrun Mercia. In Wessex, she witnesses another Viking attack and this compounds her fear of the enemy.
She falls in love with a Mercian lord but is heartbroken to be given as bride to the ruler of Mercia to seal the alliance between the two Anglo-Saxon kingdoms.
She must learn to subjugate her feelings for her first love, overcome her indifference to her husband and win the hearts of the Mercians who despise her as a foreigner and twice make an attempt on her life.
When her husband falls ill and is incapacitated, she has to learn to rule and lead an army in his stead. Eventually she must fight to save her adopted Mercia from the Vikings and, ultimately, her own brother.   Available on Amazon.com

4 thoughts on “Calm Before the Danes: Guest Post by Annie Whitehead”