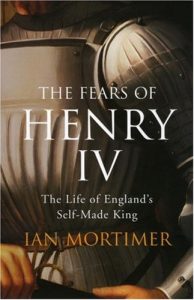 Henry IV is one of those kings best remembered because of Shakespeare, and even there he was overshadowed by more colorful characters. But in reality, he played a pivotal role in English history; without Henry of Lancaster, the Wars of the Roses would probably never have taken place. Ian Mortimer gives us a thorough and sympathetic biography of this unfortunate man, who started out so magnificently and ended up so pathetically. It seems that the antagonism between Richard II and Henry of Bolingbroke went all the way back to their childhood; interestingly enough, they were only a few months apart in age. Richard, raised quietly in his sick father’s (the Black Prince) isolated household, never had the benefit of interacting with children his own age: “He was both lacking in confidence and extremely self-conscious.” Henry, on the other hand, had everything a noble son expected, surrounded by boisterous siblings and companions, traveling around the family estates, and of course learning skills of arms including jousting. Just before Edward III’s death, Henry was sent to court and was knighted alongside Prince Richard; he and Richard became Knights of the Garter together in 1377. But the boys never really got along, and during the Peasants Rebellion in 1381, Henry was left behind in the Tower of London while King Richard went to meet the rebels at Miles End; it was only by the quick-witted intervention of one of the tower guards that Henry didn’t meet the same grisly end as Bishop Sudbury and Treasurer Hales. Did Richard leave Henry behind to protect him, or was he indifferent to Henry’s fate?

Although Henry of Bolingbroke was one of the five Appellants who threatened Richard’s rule in 1387, his participation was late in coming and not as virulent as the other earls. In fact, he was the one who argued against Richard’s deposition with his uncle Gloucester, who coveted the crown for himself. The author tells us why: because Edward III’s missing entailment of 1376 had settled the inheritance on male descendants only—which put John of Gaunt next in line. “If Richard was deposed, the Lancastrians might lose their position in the succession forever.” The royal succession was the key to Henry and his father’s behavior, for even though Richard did everything to supplant them over the years, their position was strong and Henry would not be easily displaced. Richard thought he got rid of the problem by banishing Henry for ten years, but when he changed that sentence to banishment for life, Richard crossed the line. By dispossessing the most powerful noble in the land, the king threatened everyone. Nobody was safe from his tyranny. As far as Henry was concerned, Richard had left him no choice. Either he acted the landless exile for the rest of his life, or he would have to take his inheritance back. And the rest of the barons were on his side. Once Henry invaded England, he had no choice but to depose Richard. The dilemma was clear: “If he was successful, and forced Richard to restore his Lancastrian inheritance, Richard would only hate him more intensely. One day the king would seek revenge, just as Edward II had done against Thomas of Lancaster.” We know the rest of Richard’s story, but Henry was in for rude awakening: from now on, “He would have to learn for himself what it was to be a hostage to the mood of the people, especially a people who now knew they had the power to dethrone a king.” The tables were turned; Henry was to discover that criticizing a king was much easier than ruling in his stead.

Halfway through the book, we transition from Henry of Bolingbroke to Henry IV. He had all the attributes of a great king: he was the richest man in England because of his Lancastrian inheritance; he was strong and handsome; “he was the ultimate thoroughbred warrior”, respected all over Europe—although he was soon to be disappointed when few European rulers recognized him as king. And his problems at home began almost immediately. First, what was he going to do with Richard? Not three months after Henry’s coronation, the first rebellion known as the Epiphany Rising was led by nobles who sought to release King Richard from prison. The deposed king had to go, and the author believes that Henry personally ordered him starved to death. But rumors of Richard’s escape to Scotland plagued Henry for years to come. Rebellion after rebellion took their toll on both Henry’s fortune and his health, so that by the end of his fourteen-year reign, he was a broken man, scorned even by his son and heir Henry of Monmouth. Although father and son patched things up at the end, this was only after Parliament tried to wrest the power from his hands, forcing Henry to bounce back from his sickbed with almost superhuman effort and retake control of the country. He had gone through so much to keep his crown, it wasn’t possible for him to relinquish his power when his body failed him.

I found this to be a thoroughly informative book which addressed a lot of issues normally overlooked in a rush to get to the next reign. Henry IV was a powerful influence on his age, and if he hadn’t been struck down in his prime by a still unidentified disease, I believe there’s much more he would have done to bring back the monarchy to a semblance of what it was before Richard II tried his experiment in autocratic rule.

One thought on “My Review: The Fears of Henry IV: The Life of England’s Self-made King”