These great pre-Conquest Earls, who owned hundreds of estates all over England, must have favored a house or two.  I keep wondering whether a farmer’s field, or a parking lot might be the very site of a lord’s favorite retreat in the country (in the city it would have been better defined).  They had to live somewhere, and since stone castles came later, I guess they must have lived in big wooden structures which of course left no trace.

We know that Earl Godwine was probably the richest man in England after the king (or was he richer than the king?).  But where did he live?  Research about Godwine and Harold II keeps bringing up the name of Bosham, which is a town in West Sussex not far from Portsmouth and apparently their mainstay.

It is said that King Canute even had a house in Bosham (after all, he was friendly with Godwine), and that one of his daughters may have drowned in the mill race at Bosham and was buried in the Cathedral.  It is said that Harold Godwineson’s body was buried there (though most people think he was buried at Waltham).  Godwine’s eldest son Swegn murdered his cousin Beorn at Bosham, and Harold is said to have sailed from Bosham on his fateful trip to Normandy, when he fell into the clutches of Duke William.  The Saxon church is depicted in the Bayeux Tapestry.

So there are certainly a lot of associations with Bosham.  I was surprised to find, in A History of the County of Sussex: Volume 4 by L.F. Salzman, that the author was able to trace the Manor of Bosham all the way from the Norman Conquest to the Earl of Iveagh, who owned it when the book was written in 1953. Even William Marshall and clan had a hand in it. 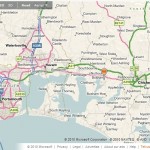 And today, there is still a Manor of Bosham and a Manor of Bosham House, which allegedly stands on the spot of Canute’s residence.  A visit here might be the closest we will get to Godwine’s stomping-grounds, although first you have to get through all the touristy references to Canute Trying to Command the Tide…yep, I forgot to mention that one!

One thought on “Where did Earl Godwine Live?”