My interest in “The Royal Household and the King’s Affinity: Service, Politics and Finance in England 1360-1413” by Chris Given-Wilson goes way beyond what I can discuss in a book review. In Part One I talked about the king’s servants, from the lowest page to the great officers. When we move on to the chapters about the king’s affinity—or his retinue, for lack of a better word—we learn about the different layers of intimates: courtiers, knights, retainers, and so on. Some of them received annuities (the chamber knights) and some of them were only called upon in case of specific need and were paid accordingly.

The chamber knights were intimates of the king and were often sent away on special missions (as ambassadors, for instance, or in Burley’s case to negotiate his marriage). At the start of Richard’s reign there were about ten chamber knights, mostly left over from the Black Prince’s household; the most famous of them were also victims of the Appellants in 1388: Simon Burley and John Beauchamp of Holt. Two others were beheaded and three more were ordered to leave court. In the ’90s a new generation of intimates formed around the king—closer to his age—and by the end of Richard’s reign he had about 18 chamber knights in service. According to the author, “they actually had regular duties at court, either in the chamber or in the hall, and that they were obliged to remain at court for certain periods of each year (perhaps this was organized on a rotational basis, perhaps it was as other duties allowed, but certainly some of them would have been with the king all the time).” Chamber knights were rewarded with “temporary grants such as wardships, the custody of royal lands or castles (with attached fees), life annuities, and salaried posts in the king’s gift.” This was not a path to great landed wealth, though Richard did reward them whenever he could.

The author thinks about the royal affinity in terms of concentric circles around the king. The inner circle, most of the time, controlled access to the king—much to the annoyance of those who thought they deserved better. The king’s intimates—aside from chamber knights—were great officers of state, royal councilors, great magnates (in his favor), esquires of the chamber, and clerks of the royal chapel. Included among his inner circle were the bachelerii—or bachelors—”a distinct group of retainers in whom their lord reposed a special trust”. Some (perhaps all) were indeed chamber knights, but not all of them are recorded as receiving fees and robes. Perhaps they were just close personal friends; it’s difficult to say for certain. The second circle “may be defined as those who were bound to the king by ties of service, and by the fact that he paid them a regular wage…and expected them to serve him on a regular basis.” These included department officials, sergeants-at-arms, and lesser clerks; the majority of the household of 400-700 total belonged to this circle. The third (and outer) circle included those called upon for specific needs as mentioned above: the king’s knights, the king’s esquires, archers, and yeomen. They mostly did not live at the court and were called up as required, but here too there were layers of service. You had the bannerets (a superior rank of knight with a personal retinue of up to 20 men; he received 4s a day wages on campaign), simple knights (who received 2s a day on campaign), and esquires.

The king’s knights were the military men who mostly received annuities, “who were not of the royal household but who were attached to the person of the king”. After the episode with the Appellants, Richard started retaining knights for life; he realized that “he wanted to be sure of a loyal core of followers in a crisis” which was sorely lacking in 1387. In the last couple of years of his reign during his “second tyranny” he surrounded himself with the turbulent Cheshire archers, thus contributing greatly to the costs of the exchequer and wreaking havoc with the locals. In the same time frame he started retaining squires for life as well, in somewhat greater numbers; they were about half as expensive to maintain as knights. 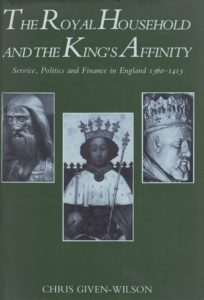 So the king’s knights were among his lay courtiers. But not to be overlooked were his clerical courtiers, those of the king’s chapel, numbering up to 50 at any one time. The clerics were the ones who did the departmental work, i.e. clerks of the chancery, clerks of the exchequer, the privy seal office, the marshalsea, the chapel, etc. The clerical position was often a stepping-stone to higher religious posts, and they usually held prebends or canonries outside of the court from which they received the bulk of their livings. Many went on to be bishops; in fact, “by the end of the reign Richard had secured bishoprics for so many of his household clerks that the episcopacy must almost have come to resemble an extension of the household.” It is interesting that in his last few years, “the number of clerks among the king’s closest companions and advisors was considerably greater than the number of chamber knights”. They were to become a thorn in the side for Henry IV, many going so far as to assist the rebels in 1400.

It was contemporary opinion that Richard was much too impressionable and influenced by his “evil councilors”. It was the purpose of the Lords Appellant to remove his inner circle so they themselves could exert some influence over the king. They certainly succeeded in eliminating (one way or the other) more than 40 people from his household, but they fell short of their ultimate goal once he reached his majority and took control of the government in 1389.