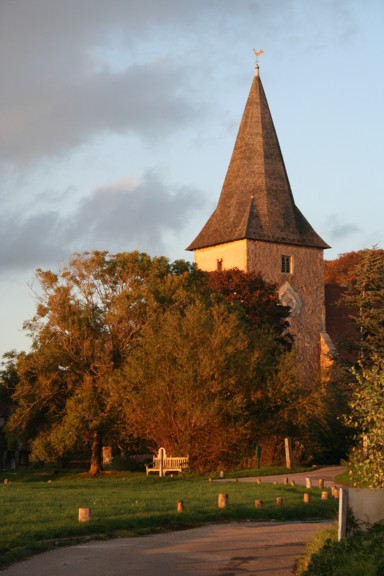 A visit to Bosham reveals a very pretty coastal town with firm connections to the Godwine clan.  In an earlier post, I conjectured that Earl Godwine may have used Bosham as one of his main residences.  It makes sense, since it is one of the only places in England actually drawn in the Bayeux Tapestry; Harold departed from Bosham before his fateful visit to Normandy.

The Holy Trinity church is said to date back to the 10th century on the site of a Roman Basilica, and there is a gravestone under the Anglo-Saxon arch marking the spot believed to hold the bones of an unnamed daughter of Canute who drowned in the millstream. There is no proof that the child’s skeleton belonged to Canute’s daughter, but the position of importance in the church combined with local legends makes a strong case. I find the Canute connection very interesting, since he and Godwine were close throughout Canute’s reign.  It is thought that Canute actually had a residence in Bosham as well, and may have built it on the foundations of Emperor Vespasian’s palace; tradition has it that the Romans established an encampment there. Oh, and this is the place where Canute allegedly tried to Command the Tide, to demonstrate to his followers that even the king’s powers were limited compared to the supreme power of God.

Even more interesting, in 1954 an unmarked coffin was discovered under the floor stones, just a few feet from the royal princess.  Although the skeleton was not intact, they did identify the “thigh and pelvic bones of a powerfully built man of about 5 ft 6 in. in height aged over 60 years with traces of arthritis” (see John Pollock, “Is King Harold II buried in Bosham Church?”). Its proximity to the princess denotes a person of importance, and local tradition has long believed that the bones belonged to Earl Godwine himself.  However, the Anglo-Saxon Chronicle states that Godwine was buried in Winchester, and John Pollock believes that the bones could have belonged to Harold Godwineson. A headless one-legged skeleton would certainly be consistent with the condition of poor Harold after he was hacked to pieces at the Battle of Hastings! Also, it was said that William the Conqueror wanted to make sure that Harold’s resting place would not become a shrine, and he insisted that his conquered foe would be interred somewhere in secret. He even promised to bury him on the seashore, overlooking the land he tried to defend. Hence, the unmarked grave? Godwine’s manor was reportedly the only territory William took possession of in Sussex. 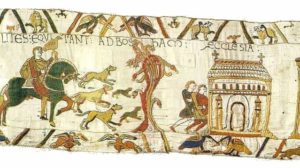 Although I couldn’t find a “Harold Slept  Here” marker, it was clear that Bosham claimed him as one of their own, and were very proud of their heritage.

8 thoughts on “Bosham, home of the Godwine clan”