In 1846 William John Thoms, a British writer, penned a letter to The Athenaeum, a British Magazine. In this letter, he talked about “popular antiquities.” But instead of calling it by its common name, he used a new term — folklore.

What did Thoms mean by this new word? Well, let’s break it down. The word folk referred to the rural poor who were for the most part illiterate. Lore means instruction. So folklore means to instruct the poor. But we understand it as verbal storytelling. Forget the wheel  — I think storytelling is what sets us apart. We need stories, we always have and we always will.

The Dark Ages is, I think, one of the most fascinating eras in history. However, it does not come without challenges. This was an era where very little was recorded in Britain. There are only a handful of primary written sources. Unfortunately, these sources are not very reliable. They talk of great kings and terrible battles, but something is missing from them. Something important. And that something is authenticity. The Dark Ages is the time of the bards. It is the time of myths and legends. It is a period like no other. If the Dark Ages had a welcoming sign it would say this:

Throughout the years there have been many arguments put forward as to who King Arthur was, what he did, and how he died. England, Scotland, Wales, Brittany and France claim Arthur as their own. Even The Roman Empire had a famous military commander who went by the name of Lucius Artorius Castus. There are so many possibilities. There are so many Arthurs. Over time, these different Arthurs became one. The Roman Artorious gave us the knights. The other countries who have claimed Arthur as their own, gave us the legend.

We are told that Arthur and his knights cared, for the most part, about the people they represented. Arthur was a good king, the like of which has never been seen before or after. He was the perfect tool for spreading a type of patriotic propaganda and was used to great effect in the centuries that were to follow. Arthur was someone you would want to fight by your side. However, he also gave ordinary people a sense of belonging and hope. He is, after all, as T.H. White so elegantly put it, The Once and Future King. If we believe in the legend, then we are assured that if Britain’s sovereignty is ever threatened, Arthur and his knights will ride again. A wonderful and heartfelt promise. A beautiful prophecy. However, there is another side to these heroic stories. A darker side. Some stories paint Arthur in an altogether different light. Arthur is no hero. He is no friend of the Church. He is no friend to anyone apart from himself. He is arrogant and cruel. Likewise, history tells us that the Roman military commander, Lucius Artorius Castus, chose Rome over his Sarmatian Knights. He betrayed them and watched as Rome slaughtered them all. It is not quite the picture one has in mind when we think of Arthur, is it? It is an interesting paradox and one I find incredibly fascinating.

But putting that aside, Arthur, to many people is a hero. Someone to inspire to. This was certainly true for Edward III. Edward was determined that his reign was going to be as spectacular as Arthur’s was. He believed in the stories of Arthur and his Knights. He had even started to have his very own Round Table built at Windsor Castle. He also founded The Order of the Garter— which is still the highest order of chivalry that the Queen can bestow. Arthur, whether fictional or not, influenced kings.

So how do we separate fact from fiction? 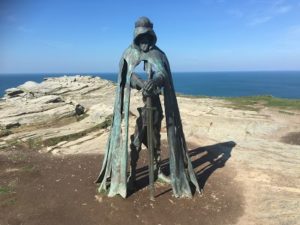 In our search for Arthur, we are digging up folklore, and that is not the same as excavating relics. We have the same problem now as Geoffrey of Monmouth did back in the 12th Century when he compiled The History of the Kings of Briton. His book is now considered a ‘national myth,’ but for centuries his book was considered to be factually correct. So where did Monmouth get these facts? He borrowed from the works of Gildas, Nennuis, Bede, and The Annals of Wales. There was also that mysterious ancient manuscript that he borrowed from Walter, Archdeacon of Oxford. Monmouth then borrowed from the bardic oral tradition. In other words, he listened to the stories of the bards. Add to the mix his own imagination and Monmouth was onto a winner. Those who were critical of his work were brushed aside and ignored. Monmouth made Britain glorious, and he gave us not Arthur the general, but Arthur the King. And what a king he was.

So is Arthur a great lie that for over a thousand years we have all believed in? Should we be taking the Arthurian history books from the historical section and moving them to sit next to George R. R. Martin’s, Game of Thrones? No. I don’t think so. In this instance, folklore has shaped our nation. We should not dismiss folklore out of hand just because it is not an exact science. We should embrace it because when you do, it becomes easier to see the influence these ‘stories’ have had on historical events.

(Book 4 of The Du Lac Chronicles)
By Mary Anne Yarde 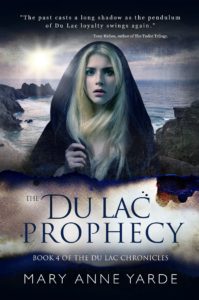 Distrust and greed threaten to destroy the House of du Lac. Mordred Pendragon strengthens his hold on Brittany and the surrounding kingdoms while Alan, Mordred’s cousin, embarks on a desperate quest to find Arthur’s lost knights. Without the knights and the relics they hold in trust, they cannot defeat Arthur’s only son – but finding the knights is only half of the battle. Convincing them to fight on the side of the Du Lac’s, their sworn enemy, will not be easy.

If Alden, King of Cerniw, cannot bring unity there will be no need for Arthur’s knights. With Budic threatening to invade Alden’s Kingdom, Merton putting love before duty, and Garren disappearing to goodness knows where, what hope does Alden have? If Alden cannot get his House in order, Mordred will destroy them all.

Yarde grew up in the southwest of England, surrounded and influenced by centuries of history and mythology. Glastonbury — the fabled Isle of Avalon — was a mere fifteen-minute drive from her home, and tales of King Arthur and his knights were a part of her childhood.

8 thoughts on “The Dark Ages: The time of King Arthur. Guest Post by Mary Anne Yarde”