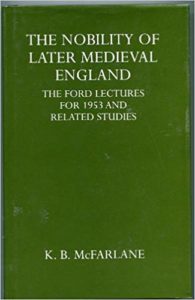 I found another jewel! Author K.B. McFarlane was universally extolled by his fellow historians for his exhaustive scholarship on late Medieval England, but he met an untimely death by stroke in 1966, leaving most of his work unpublished. Fortunately, he gave many lectures and wrote many papers that were gathered by his associates and published complete with footnotes they researched to support the text. We are assured that these essays were not written for publication (he didn’t publish most of his work) and therefore not polished, but I found them quite readable. The amount if information was incredible to me; he discussed—in detail—many topics I only “sort of” understood. The eight sections are as follows:

This may sound a little dry, but this is the kind of book where you will learn “why” things happened as well as “what”. For instance, he goes into great detail about inheritance and primogeniture. It is a big theme in this book that most great families failed to produce direct heirs to continue the line: “I do not mean they were sterile; in each generation there were as a rule large numbers of children; but few reached manhood, fewer still had male children of their own.” In this quote he is actually referring to the cadet branches; the the same thing applies to the direct heirs. “In 1300 there were 136 families whose head had by then received at least one personal writ of summons to Parliament from Edward I and whose issue can be traced… Of the original 136 only 16 were still represented by a male in 1500.” The rest “had been interrupted by the intervention of an heiress or of several coheiresses”.

When the heirs are female, there is a strong possibility that the estates will be broken up by marriage, and her portion will go to the husband (prime example Richard Neville, Earl of Warwick—Kingmaker—who married into the Beauchamp inheritance). This is one way that great families increased their wealth—at the expense of other families. Also, if the head of the family arranged for the estate to be broken up between younger sons or daughters they went to great lengths to protect the inheritance; this is where we get to entails. “The intention (of the Statute of Westminster the Second 1285) was to ensure that should a man grant lands to his younger sons, or to his daughters in free marriage, these should not be alienated by them until after the third generation; if the line failed before a third heir (i.e. the fourth generation) had entered, then the estate was to revert to the head of the family.” This is just the beginning; it gets more complicated from there! We learn about the many types of inheritances, wills, escheats, extinctions, feoffees, entails, etc. In the end, it all boils down to this: “With minor exceptions the law governing the inheritance of a fief was simple and unambiguous: primogeniture among males, equal shares between females, a son always preferred to a daughter, a daughter to a brother or other collateral (kin).” Of course, as he goes on to say, “It was thus essential that its proprietor, if not childless, should have at least one son or, failing sons, not more than one daughter. Those were difficult conditions to fulfil.”  There is a lot to digest here, and I’m sure it will take another reading or two before I’ve absorbed most of it. It’s a great addition to my library.