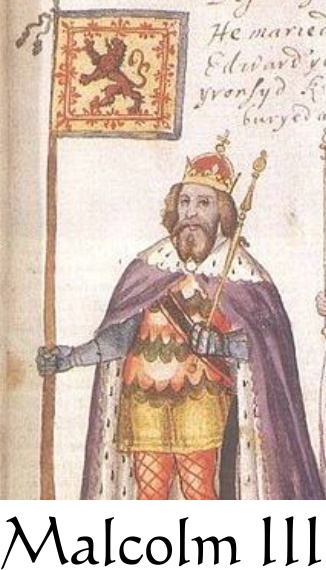 I don’t think it would be too much to say that most lovers of the Middle Ages love to read about the Plantagenets.  They all seem to be as colorful as their namesake, Geoffrey of Anjou, who coined the family name from the broom flower planta genista which he tucked onto his helmet (or his hat).  In fact, the Anjou side of the family gets so much attention that very few people give much thought to the fact that Henry II is descended from Malcolm III through his grandmother on his mother’s side.

Malcolm Canmore and Margaret Aetheling had a passel of children: six sons and two daughters.  One of these daughters, Edith (or Eadgyth, later known as Matilda) was married in 1100 to King Henry I of England when she was about 21 years old (thus uniting the Normans with the old Anglo-Saxon dynasty).   This is the same Edith that Malcolm earlier tried to marry to Alain le Roux.  If you saw  the recent series Pillars of the Earth, it’s hard to forget the scene where Henry I keeled over while eating lampreys.  And so he died, according to historians.

If you remember, Henry I had one son who was killed in the White Ship Disaster of 1120, which sunk in the English Channel drowning 300 people.  His only surviving legitimate child was their daughter Maude, who later married Geoffrey of Anjou.  Although Henry I made his nobles swear to support Maude’s claim to the throne, when he died in 1135 she was actually far away in Anjou, leaving the way open for her cousin Stephen to step in and steal the throne.  And spark the civil war, which lasted approximately 18 years.

Maude’s son, the future King Henry II was only two years old at the time.  He did not get to meet his grandmother who died in 1118, but he was knighted by her brother, his great-uncle David I of Scotland in 1149.  He eventually forced David’s son William the Lion to swear fealty to him, but that was after William joined forces with Henry’s three sons and Eleanor in the Revolt of 1173-1174.  But of course, that’s another story!

One thought on “Malcolm Canmore, ancestor of the Plantagenets”