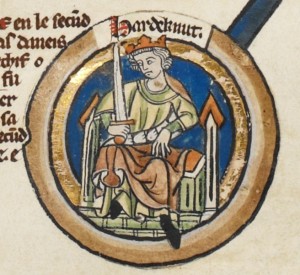 Soon after Canute gained the throne of England, he invited Aethelred’s widow Emma of Normandy to be his queen.  Emma agreed, on the condition that only the sons born of their union would be next in line to the throne.  This meant that two of his sons and two of her sons from previous marriages would be put aside.

And so Canute and Emma’s child Harthacnut was born in 1017. It seems ironic to me that the young heir Harthacnut was sent to Denmark when he was eight years old, under the regency of Canute’s brother-in-law Jarl Ulf, to help strengthen Canute’s hold on the country. Why would England’s heir be raised in Denmark? But that’s how it went, and in Denmark he stayed, eventually ruling in  his own right. When Canute died unexpectedly in 1035, his firstborn son Harold Harefoot (through his handfasted wife Aelfgifu of Northampton) was resident in England, and heir Harthacnut had his hands full in Denmark and did not dare leave the country.

The matter went before the Witan. Earl Godwine and Wessex were in favor of Harthacnut, and the North favored Harold Harefoot, their native son.  The Witan ruled, at least short-term, to divide the country and appoint Harthacnut King in the south, and Harold King north of the Thames.  Apparently Emma acted as regent for Harthacut, and sent her son increasingly insistent messages to come and claim his kingdom.

Unfortunately, Harthacnut could not get away, and by 1037 Harold Harefoot claimed the whole kingdom, causing Emma to flee to Bruges in Flanders; she blamed Earl Godwine for failing to uphold her son’s claim.  There she awaited the arrival of Harthacnut who sailed to join her in 1039 with 10 ships, preparing to invade England. As it turned out, the invasion was not necessary because they heard word that Harold was ailing. Indeed, the king died a few months later, and Harthacnut sailed to England with 62 warships to claim his kingdom.

Actually, the transition was peaceful and Harthacnut managed to raise a Danegeld of 21,000 pounds to pay his mercenaries off, just like Canute had done in 1017.  His first official act on taking the throne was to order the body of his brother, Harold Harefoot, disinterred and thrown into the Thames. That certainly set the stage for his short reign! 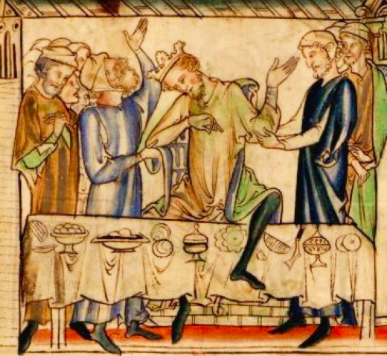 Harthacnut ruled by intimidation, harrying the population when they objected to his harsh taxation to pay for a large fleet he felt necessary to keep the populace under control.

Harthacnut had health problems of his own; in 1041 he invited his half-brother Edward (the Confessor) to live in England, and may have made Edward his heir.  And not too soon!  In June of 1042, during a wedding feast as he was toasting the bride, Harthacnut went into convulsions and died shortly thereafter, unmourned by all but his mother.

Hence ended the brief reign of the Danes. If Svegn Forkbeard, Canute and his sons weren’t so short-lived, things might have turned out differently for Anglo-Saxon England.

2 thoughts on “Who was Harthacnut?”