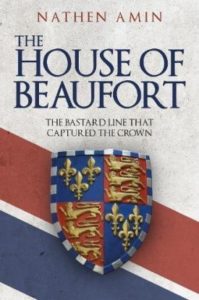 I always knew of the Beauforts as John of Gaunt’s illegitimate children by Katherine Swynford, and I knew about Margaret Beaufort, mother of Henry Tudor, but everything that happened in between was kind of fuzzy to me. Luckily, Nathen Amin shines a light on this deserving dynasty. This book covers three generations (and a little more) of Beauforts, each with its own superstars to keep the family in the forefront of politics. Much of the action takes place in France during the 100 years’ war, for our Beauforts produce a few spectacular commanders—though a few bumblers also slip through. It seems that each generation gets a little watered down, until by Henry VI’s time they do more harm than good, managing to extinguish themselves in the male line. But for a while, they shine very brightly indeed. They came into their own after Henry IV became king, and throughout the Beauforts knew that their fortune—and future—were linked to the crown:

“By 1403 the Beauforts had unquestionably established themselves as a core part of Henry IV’s inner circle, devoted to his cause as the king struggled to maintain control of his crown. Henry recognized the necessity of ensuring his half-brothers were satisfied in their positions, while the Beauforts acknowledged those same positions were only held courtesy of the king’s good grace. It was to the mutual benefit of both parties that this relationship remained in place for the foreseeable future.”

And indeed it remained in place for decades, notwithstanding a few slip-ups during the complicated Wars of the Roses. Their hold over young Henry VI was absolute for much of his minority, though at the same time it was a Beaufort that nearly lost France for England. They were good at landing on their feet, however. The steadying influence (as well as bountiful financial contributions) of Cardinal Henry Beaufort—from the first generation—kept the family in power and the crown afloat until he died in 1447 (by then, Henry VI was 26 years old). The cardinal wasn’t always appreciated, but his unfailing dedication to the “cause” kept his enemies at bay.

Alas, as usual the Beauforts were not very creative at naming their children, and the plethora of Johns, Henrys, Thomases, and Edmunds were mind-numbing. We were given one very simple family tree at the beginning, but it was not enough—especially since their titles were passed on as well, and not necessarily father to son. And of course, the generations overlapped, so it was hard to remember who was the brother of King Henry and who was the nephew. I made my own cheat sheet but by the Wars of the Roses I gave up trying to keep everyone straight. Also, to keep the page numbers down, the font was incredibly small and it was hard to read for my middle-aged eyes (not the author’s fault, I understand). There was a tremendous amount of information in this book and I tip my hat to Nathen for taking on such a project. I admit I found it a struggle to get through all the way to the end. This is not the kind of book you will read for entertainment, but as a resource it is invaluable.