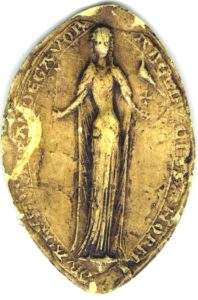 Isabella had a gold matrix, or seal-die, which was used to make her seal as Queen of England. The seal is the wax impression; the matrix is used over and over again to make the impression. Isabella’s seal is oval as all medieval queen’s seals were, and shows the full length queen standing with her hair flowing, a cross with a bird above it in one hand and a lily in the other. Each of these are symbols of purity and also fertility. At that time, once married, a woman could not be shown with her hair down or indeed uncovered. The other side would have shown her crowned but I have never seen that and suspect it is badly damaged. The wax impression was threaded onto the parchment documents with strips of ribbon or cord. The gold matrix is about 1 1/2 inches long and just under an inch wide and would have been stored in a special pouch or richly embroidered bag. The one illustrated is from 1280 and is the seal bag for Edward 1st, her grandson.

Queens generally did not seal in matters of state but restricted the use of their seals to their own affairs and the disposition of their often considerable wealth. However while Queen of England between 1200-1216, Isabella rarely used her seal and she did not have the wealth usually given to a queen. King John treated her in a mean-spirited way! But when she returned to France she used it always. She also had a smaller, more personal seal that she kept with her at all times. All the records of her using the seal show that it was pressed into green wax, not the red that is so often associated a with wax impression. 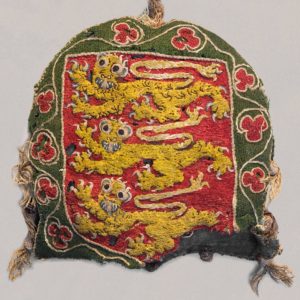 The gold matrix is in the archives in Angoulême a tangible connection with Isabella of Angoulême, Queen of England

She stamped the letter with her great seal, and there she is standing, facing front, robed and crowned, her hair falling in ringlets around her face. In her right hand she holds a flower, in her left a bird. Isabella, by the grace of God, Queen of England, Lady of Ireland. Isabella, Duchess of the Normans, of the Men of Aquitaine and of Anjou. 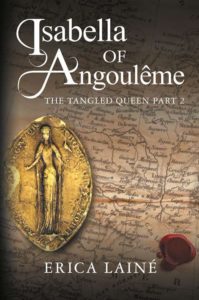 Set in the thirteenth century, the kingdoms of England and France continue to struggle over territory. King John’s widow, Isabella of Angoulême, Queen of England is ignored and unwanted by the English court. She moves back to France to claim her inheritance. The English councillors expect her to be biddable to them and to guard these lands for King Henry III, her nine-year-old son.

But in the Poitou, a region far from Paris and London, local fiefdoms ignore all forms of authority.

The Tangled Queen is the story of Isabella’s determination to forge her own powerful domain. She has to face forceful men who would stop her at every turn. She intrigues and plots to make her dream a reality and she learns to play all sides against each other. Isabella’s second controversial marriage is one full of passion, pride and politics. Treachery becomes second nature as her ambitions soar. She must be unassailable.