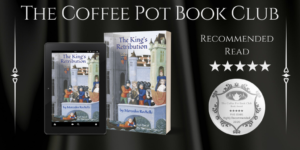 “When I was young and powerless, they saw fit to manipulate Parliament to achieve their selfish ends. Those days are over. It’s my turn, now. I mean to bring the Crown back to the splendor and magnificence it possessed in the days of Edward I—when the Crown ruled Parliament, not the other way around…” 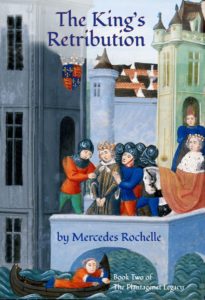 They had demanded pardons, and he had given them for there had been no other choice. But things were different now. The son of Edward, The Black Prince, would see justice served. Richard II would have his revenge, and there was nothing anyone could do to stop it.

At least, Richard II had thought there was no one to stand in his way. But the Wheel of Fortune was forever turning, and fate was not done with Richard yet…
From the death of Queen Anne to the utter despair of a vanquished king, The King’s Retribution: Book Two of The Plantagenet Legacy by Mercedes Rochelle is the story of the tyranny of Richard II and his subsequent fall from grace.

Confident in his newfound power, Richard is determined to right an injustice. He may have given those involved in the Lords Appellants’ rebellion their pardons, but he has not forgotten such a gross betrayal. And now was the time to right that wrong. Besieged with paranoia, Richard travels along a path that will ultimately end in his demise. With her enthralling narrative, Rochelle has given us a Richard who is determined to assert his personal will upon the baronial challenges that plagued his early reign. But in doing so, Richard abuses his divine powers which leads to dire retribution seemingly from the heavens. Why did Richard do this? Rochelle goes some way to explain. Richard is left totally undone by the death of his beloved wife — he loses the one person who understands his fears and can console him. Beset with grief and desperate to gain a sense of control in his life, Richard forgoes the fragile peace that was so hard-won in order to consolidate his power. Rochelle does not give us a Richard who has lost his mind, as some historians argue, but instead one who is governed by fear which leads him down a road of forced confessions and even the murder of his uncle, Gloucester.

But that is not his only crime. Richard is seemingly out of touch with the common people, and he mismanages the country’s finance. He is also apt at creating friction between the nobles, but especially between members of his family. This Rochelle describes in all its glorious yet sometimes ugly detail.

As Richard loses control over his country and his own destiny, Rochelle presents her readers with a despairing king. Richard’s desperate attempts to hold onto his honour and dignity despite Henry’s efforts to humiliate him was masterfully drawn. One could only feel sympathy for this dejected King as he is betrayed by almost everyone around him. And yet, with quiet dignity, Richard endures the hecklers on the streets as he is ushered into a world of uncertainty and despair.

Rochelle presents two very different sides to Richard — the paranoid statesman whose own personal bodyguard, the Chester Archers, causes disquiet and concern, but also Rochelle depicts a devoted husband. I thought Rochelle’s depiction of Richard II was utterly sublime, and his desperation really drove this story forward and made it unputdownable.  Read More