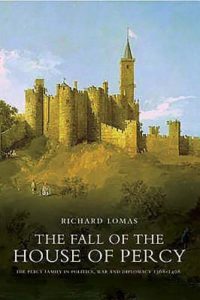 This book with the catchy title has actually proved to be very readable and informative. I had hoped it would answer some of my most nagging questions (what exactly was the relationship between Thomas Percy and Prince Henry, and of course, why did he throw everything away to fight at Shrewsbury? And why did Hotspur throw everything away on such a risky venture?) Alas, I can only assume that the answers are lost to history and we are left with plenty of speculation. Nonetheless, this book provided me with many details I didn’t find elsewhere and that helped explain situations.

“The alternative and reasonable explanation is that whatever loyalty to Henry he (Thomas) had was dissipated by the king’s treatment of him. Also, there was family solidarity: he probably felt unable to fight for a king his nephew was seeking to depose. What is unclear is the point or stage at which he was drawn into the plot. His move, however, was militarily significant in that he brought with him eight knights, 96 esquires and 866 archers, most of them staunch Ricardians and/or Cheshire men, that constituted over a quarter of the Prince’s force.”

The same quandary applies to the relationship between Hotspur and Prince Henry. Hotspur was often portrayed as young Henry’s mentor, but anecdotal evidence gives us a small window of opportunity. Even biographies of Henry V yield little information. But enough of what is lacking. The author has given us a solid picture of the Percys starting with family background, leading to Henry Percy’s early career as first Earl of Northumberland. We get a thorough description of the wars and politics of the years between 1368-1389, bringing in the international influences. By chapter four, we explore the last ten years of King Richard’s reign and the revolution of Henry Bolingbroke, which relied heavily on the Percys for its success. They were greatly rewarded, but during the next few years it became evident that Henry IV was not as committed to their cause as they were to his. Using the rival family of the Nevilles as a counter-balance, Henry sought to control the overweening Percys by giving the Nevilles land and offices, just as Richard II had done. Alas, he only succeeded in driving them into the arms of Owain Glyn Dwr, who was more than happy to combine forces in an effort to unseat the usurper king.

A major fallout occurred as a result of the battle of Humbleton Hill—a huge success for the English against the Scots, where a large number of aristocrats were captured. “It was the fate of these men that shortly became the occasion of a bitter quarrel between the king and Hotspur. A week after the battle, on receipt of the news of the victory… Henry wrote to the Earl as Warden of the West March, strictly ordering that none of the Scottish prisoners should be ransomed or released, except on his authority. The stated reason for this prohibition was the ‘urgent causes now moving the king’ but without indicating what they were.” Earl Henry duly delivered his hostages to the king at Westminster, but “Hotspur refused to hand over the Earl of Douglas. In doing so, he flouted the rules of war, which accorded the king the right, for obvious political reasons, to captured commanders and prisoners of royal blood, on the understanding (which Henry explicitly gave in his letters) that he would suitable compensate the captor.” So you see, the author gives us a balanced description of events, unclouded by the usual haze of sentiment surrounding the chivalric Hotspur. The disaster at Shrewsbury was followed by two more failed rebellions of Henry Percy—the last when “he was in his early sixties, that is to say, he was a man of very advanced years, whose health may have been poor and faculties impaired. As regards his final throw in 1408, it seems clear that it had virtually no chance of success and that the Earl may well have known this as he set out.” A sad end to a proud and powerful man.

The dynasty did survive after all, but their eventual fate is outside the scope of this volume. Overall, I liked this book very much and find it to be a worthy addition to my library.