Some of the events referred to in my novel, The Anarchy, are based on real historical prompts. My character, Sheriff Haith, investigates the sinking of The White Ship off the coast at Barfleur in the English Channel on 25 November 1120. Three hundred young Norman nobles were drowned in the shipwreck, including King Henry I’s heir, Prince William Adelin. Historians have been circumspect concerning the possibility of foul play in the wreck, as they must be, but I have taken fictional license and my story employs the suspicious circumstances surrounding the sinking.

The main contemporaneous accounts of the wreck of The White Ship were written by Orderic Vitalis and William of Malmesbury. It is recorded that Stephen de Blois, who later became king of England, disembarked from the ship at the harbour just before it sailed, in the company of William de Roumare. Stephen claimed to have disembarked because of a sudden illness or because of the rowdiness of the other passengers. Two Tironian monks also disembarked. A butcher named Bertold of Rouen was the only recorded survivor. William de Pirou was listed on the list of victims of the wreck but, subsequently, appeared twice at court before disappearing under mysterious circumstances. Beyond that, the ‘evidence’ discovered by Haith in my novel is my invention.

Haith is based on Hait who is documented as the real sheriff of Pembroke in the 1130 pipe roll, the court records (Green, 1986). Hait is presumed, from his name, to have been Flemish. It is my invention to make him a close friend of King Henry. According to Gerald of Wales, Hait was the father of one of Nest ferch Rhys’s sons. Nest is the heroine of my novel. I created the physical characteristics of Haith after meeting a lovely Dutchman at lunch one day at my neighbour’s house. Haith’s sister, Ida, a runaway nun from Fontevraud, is my invention.

Haith’s investigations in the novel lead him to track down the butcher Bertold and to interrogate William de Pirou. Haith suspects the Norman noblemen Stephen de Blois, Waleran de Meulan, and Ranulf de Gernon, who each had their reasons for hating King Henry and wanting to see his heir removed. King Henry also lost two of his illegitimate children in the wreck, Countess Mathilde of Perche and Richard, Earl of Chester, and his niece and daughter-in-law, Matilda, Countess of Chester. When the courtiers eventually found the courage to give the king the news, he collapsed with grief

After the devastating losses in the shipwreck, King Henry’s initial solution for the problem of the succession was that he and his new young queen Adelisa would have a son and, probably, that his oldest illegitimate son Earl Robert of Gloucester would act as regent. When the hope of a legitimate male heir faded, Henry focused on the aspiration that his daughter Maud would give him a grandson. When Henry died, Maud was pregnant in Normandy and her cousin, Stephen de Blois, rushed to England and usurped the throne.

Although Stephen de Blois had extensive holdings in England and was married to a descendent of the English kings, there is no evidence that King Henry ever considered his nephew as a potential heir. Instead, iconoclastically, King Henry I attempted to put a woman, his daughter Maud, on the English throne. He did not require his barons in England, Wales, and Normandy to swear to support her as regent, but rather to support her as his heir. If Maud’s protracted bid to contest her cousin Stephen’s usurpation of the throne had been successful, she would have been the first woman to rule England, Wales, and Normandy in her own right. 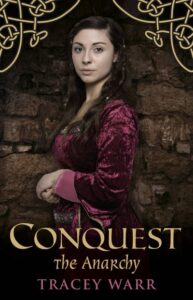 There was constant warfare in England, Wales, and Normandy during the reign of King Stephen as he struggled against Empress Maud, and her supporters. Some historians have dubbed Stephen’s reign ‘The Anarchy’, whilst others have argued that it was not as anarchic as other commentators claimed. Certainly, Stephen lost significant parts of the kingdom that King Henry I had ruled including Normandy and large parts of Wales. The civil war between Stephen and Maud went on for nine years. Stephen’s brother, Bishop Henry of Blois, played a fascinating double game, frequently switching sides between the two contenders. (See my blogpost https://englishhistoryauthors.blogspot.com/2020/06/the-man-who-walks-behind-satan-on-trail.html.) It was very tempting to write about Empress Maud herself, but, in my novel I am focusing on Nest ferch Rhys and events in Wales. There are a number of good fictional accounts of the extraordinary empress (see, for example, Elizabeth Chadwick’s Lady of the English). In 1148 Maud gave up the struggle for England to her son, Henry FitzEmpress, and returned to Normandy permanently.

Civil war between the forces of King Stephen and Henry FitzEmpress continued in a desultory fashion. In 1152 the archbishop of Canterbury refused Stephen’s request to anoint his son Eustace as junior king. His queen, Matilda of Boulougne, died in that year. 1153 was a bad year for King Stephen. He was fifty-seven years old and was wounded three times; his son Eustace died suddenly and his other son, William, broke his thigh in a riding accident. Many parts of England had been devastated by years of civil war and even the hyper-aggressive Norman barons wearied of the conflict. In November 1153, at Winchester, King Stephen and Henry FitzEmpress agreed that Henry would become king on Stephen’s death, and this was ratified in a charter that Stephen issued at Westminster in December. Henry II and Eleanor of Aquitaine were crowned king and queen of England on 19 December 1154. Henry’s mother, Empress Maud, continued to give him advice throughout her long life and died in Normandy in 1167.

King Henry I may well hold the record for the highest number of illegitimate children (24) including at least nine sons (one of them with my heroine, Nest ferch Rhys) so it was a horrible irony that the untimely death of his only legitimate son led to civil war in this period known as The Anarchy.