This map was scanned from Edward A. Freeman’s History of the Norman Conquest of England.  I found it in the Appendix of Volume 2 and I thought it was very helpful since a picture is worth a thousand words, as they say… doubly so for maps! 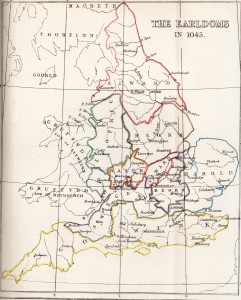 I  hope you can read this map through all the rivers and towns (click on it to make the map a little wider); if you would like to see a larger version, drop me a line and I’ll send it to you.  These are the earldoms at the height of Edward the Confessor’s reign; the shifting of borders and earldoms was quite fluid during Edward’s reign, and this is a snapshot of the situation right before Swegn’s first exile.

These earldoms can be traced back to the great division during Canute’s reign, when he partitioned the kingdom into four great earldoms.  Wessex, the most important, was originally retained by the King then given over to Godwine in 1020. Mercia was given to Eadric (which only lasted until 1017), passed to Leofwine then to Leofric. East Anglia was given to Thurkill (banished in 1021) and eventually passed on to Harold Godwineson. The last, Northumbria, was given to Eric and eventually passed on to Siward the Strong.

Originally, Mercia stretched from east to west across the whole country from Bristol to Barton on the Humber.  As time progressed and the great earldom was dismembered, as Mr. Freeman suggests, it is unclear whether the smaller partitions were totally independent earldoms or whether they were subordinate to the Earl of Mercia.

Apparently both Harold and Beorn were given their earldoms in 1045. Beorn was the son of Ulf and Estrith, sister of Canute who was later married to Robert of Normandy.  Was this the connection that inspired Edward to make him an earl?  I found it interesting to see how Siward’s earldom was broken up by Beorn’s and how Beorn’s earldom was broken up by Siward’s.  Poor Beorn was the same who was murdered by Swegn Godwineson, but that was a few years later.

You can see Ralph’s earldom next to Swegn’s; this is the same Ralph of Mantes who was nephew of King Edward. When Swegn was exiled in 1046, Ralph’s earldom was expanded to encompass Hereford, where he was resoundly trounced by Gruffydd ap Llewelyn and the errant Aelfgar (son of Earl Leofric) in 1055.  Ralph died two years later.

During the reign of Edward, it’s not much of an exaggeration to say that the “big three” – Godwine, Leofric, and Siward held most of the influence with (or against) the king, depending on the situation. It’s interesting to see how Edward played one off against the other.