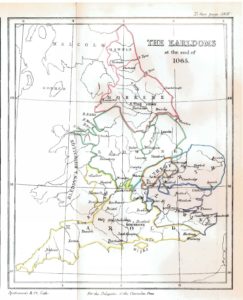 Once again, here is another map from Edward A. Freeman’s History of the Norman Conquest of England compiled by him based on signed charters, chronicle entries, royal writs, and other historical notes. This is a useful snapshot of the end of Edward the Confessor’s reign. According to Freeman, the last great division of earldoms came about in 1057 after the death of Earl Leofric of Mercia, when his son Aelfgar was translated from East Anglia to Mercia. This left East Anglia to be portioned off to the younger sons of Godwine.  Aelfgar died between 1062-1065, and Mercia went directly to his elder son Eadwine.

By November of 1065, Tostig had been driven out of Northumbria, usurped by Morkere, younger son of Aelfgar. That whole episode took the form of a revolt, later reluctantly confirmed by King Edward. The outlying section of Northumberland (Northampton and Huntingdon) were bestowed on Waltheof, son of the old Earl Siward; he was passed over as Earl of Northumbria when his father died in 1055 because he was only a child.

I find it interesting that “the ancient boundaries both of Wessex and of East-Anglia were freely tampered with” when Leofwine’s earldom was defined. Although the west side of Harold’s earldom was enlarged to encompass Ralph of Mantes Earldom of Herefordshire (probably in 1057), Harold gave up Kent and Buckingshire to his younger brother. Freeman states that the city of London never fell under the jurisdiction of any earl; the Londoners were self-governing.

Apparently the earldoms of Mercia and East Anglia were the most fluid; the borders were changed around and they were occasionally dismembered several times in Edward’s reign. It is possible that some of the subordinate earls mentioned in charters were answerable to the great earls in this time frame, and much of this confusion dates back to Canute’s reign. Additionally, it is more than possible that some of the Danish chieftains signed charters as Earl but did not command any holdings in England. It’s as clear as mud!

If you haven’t already seen it, you can view Freeman’s Earldoms in 1045 here.