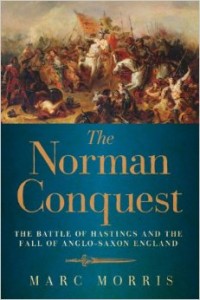 Considering the wealth of material available about the Norman Conquest, a book needs to be very special in order to stand out. Here, it was refreshing to recognize the Norman Conquest as something that did not end at the Battle of Hastings. In fact, Hastings was just the beginning of a tumultuous campaign to replace one ruling class with another, while subjugating a mutinous population. In fact, by the time Hastings is over, we aren’t even halfway through the book yet.

The first few years after William takes the crown, the incessant uprisings nearly proved to be his undoing. In my mind, to look at a map of England, where one fire went out, another appeared across the country. There were little fires marking insurrections everywhere! It seems that the men who accompanied William to Hastings did not bargain for so much resistance: “During the winter of 1069-70 conditions in William’s army were clearly so bad that there appears to have been something approaching a mutiny”. Since William did not have cash to offer his supporters, he could only promise them more land, the best thing to inflame the English even further. It started a vicious cycle that took 20 years to sort out; it seems that almost as much land was stolen from the native population as was awarded by the King. Who would be able to stop a rapacious Norman?

At the beginning of the book, I was concerned that Morris was leaving key considerations out of his tale. But no, it turns out that he just presented his facts in a different order than I expected. Satisfied that he gave due attention to evidence I was aware of, I was ready to absorb material I wasn’t as familiar with later on…of which there was plenty. For instance, I knew that the Normans took over vast expanses of prime land; what I didn’t know was that by the Domesday book, they had almost completely taken over everything else: “Of Domesday’s 1,000 tenants-in-chief, a mere thirteen are English”, and “Of the 8,000 subtenants recorded in the survey, only around ten percent are English…England’s middling thegns, who had numbered around 4,000-5,000, have been swept clean away.” This was an astonishing wake-up call to me, as I complacently thought that the Saxon chieftains, like Ivanhoe’s father Cedric, still held their own against the extortionate Normans. Maybe not!

To me, Morris’s study of the Domesday Book is the most critical section of this volume. I always assumed that the great survey was compiled to help William calculate how much to tax everyone. But  it was much more than that. The officers who gathered the information held courts and meetings to investigate claims of landholders and sometimes complaints from aggrieved parties. This resulted in binding charters that confirmed once and for all the exact boundaries of all the estates held by William’s feudal underlings. Not only did this give the new landowners security of title, but from now on “thanks to the survey he knew exactly who owned what and where it was located.” William was the overlord of every man in England, and they were beholden to him. It was a perfect new beginning for a system previously unknown in the land.

Having read this book, I now understand just how completely the Normans changed the country. When Canute conquered England, he “began his reign by executing those Englishmen whose loyalty he suspected and promoted trustworthy natives in their place.” When William conquered England, he “exercised clemency after his coronation and consequently found himself facing wave after wave of rebellion. The English knew they were conquered in 1016, but in 1066 they had refused to believe it.” I think this says it all!