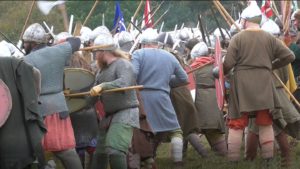 This is my third and last post referring to C. Warren Hollister’s Anglo-Saxon Military Institutions on the Eve of the Norman Conquest. We always read about calling up the Fyrd, but what was it composed of? Hollister attempts to explain this in detail and ultimately seems to coin his own phrase; he breaks down the fyrd into two categories: the great fyrd and the select fyrd. Chroniclers didn’t seem to make any distinction between the select and the great fyrd, so I think there is plenty of room for extrapolation. Nonetheless, once I understood the differences, his arguments made a lot of sense.

The great fyrd was, as you would expect, every able-bodied man who is called up in an emergency. They were locals who defended their immediate region against invasion. The key here is that “They must be able to return to their homes by nightfall. If the king should lead them farther, he is obligated to pay them wages.” Hence, they were not paid mercenaries, nor were they expected to come armed with much more than whatever came to hand: clubs, stones tied to sticks, farm utensils, etc. In many cases, they could very well supplement the better-armed select fyrd, which is perhaps what we saw at Hastings.

The select fyrd, on the other hand, is thought to be composed of those warriors provided by the Five Hide unit which I earlier discussed. Because these warriors were funded as part of the function of these Five Hides (“If the king sent an army anywhere, only one soldier went from five hides, and four shillings were given him from each hide as subsistence and wages for two months. This money, indeed, was not sent to the king but was given to the soldiers” – Domesday passage relating to Berkshire), they were better armed, better trained, and expected to travel. The select fyrd was composed of Thegns, ceorls (under the Promotion Law a ceorl could attain thegnhood if he owned five hides of land) or upper peasantry. There were intermediary groups known as cniht, radmannus, and sokeman, who might be the Five Hide warrior-representative if a Thegn was not available.

There was no annual training period for the select fyrd, and they were only called up in time of war; years could go by without going into service. This is probably one good reason why they fought on foot; there was no cavalry training as in Normandy. Also, a distinction must be made between these warriors who served because of their territorial obligations and hired mercenaries or household troops who were paid by the king or earl, etc. The housecarls would fall into the latter category, though many did own land. They were highly trained and battle-ready. The mercenaries were undoubtedly the spearhead of the Old English fyrd, so in a great battle all three categories of warriors might fight together.

One thought on “The Anglo-Saxon Fyrd”